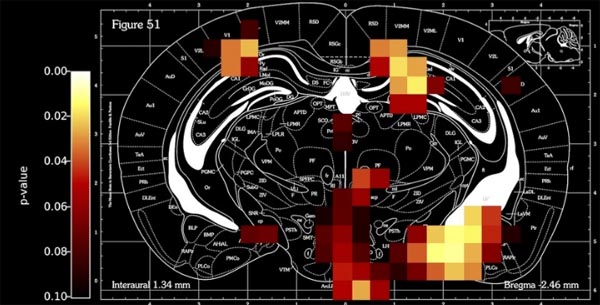 Scientists at the Max Planck Institute for Metabolism Research in Cologne have discovered brain cells, which not only tell hungry mice to search for food, but also to limit blood sugar use by the brown fat tissue. This could ensure the survival of mice when they cannot find enough to eat.

What happens when we get hungry? How does the brain control energy expenditure? To find answers to these questions a research team led by Jens Brüning, director of the Max Planck Institute for Metabolism Research, analyzed the function of a specific class of nerve cells in the brain, called AgRP neurons. “These nerve cells are located in the hypothalamus, which can be seen as the brain command center controlling appetite”, explains Sophie Steculorum, one of the authors of the study and associate of Brüning. “It has already been known for a few years that these cells control feeding behavior in hunger states”.

In the recent study, researchers demonstrated that in mice AgRP neurons use an additional mechanism to regulate the sugar metabolism in the body. “These AgRP neurons tell the body to use less blood sugar when the mouse is hungry and cannot find food”, says Johan Ruud, co-author of the study.

The cologne scientists could show that the AgRP neurons are connected with the brown adipose tissue, also called brown fat. “When the neurons are activated, the cells in this brown fat tissue are reprogrammed – they produce a different set of proteins, for example high levels of myostatin”, explains Ruud.

The protein myostatin is usually found in muscle cells and slows down muscle growth. Now the scientists could show for the first time that myostatin directly controls the sensitivity of the brown fat to insulin, which dictates how the body utilizes blood sugar.

AgRP neurons, myostatin and insulin are not only found in mice, but also in humans. Obesity and type-2-diabetes are likely associated with chronic activation of AgRP- neurons, at least in mice. The mechanism could explain why AgRP neurons are connected with those diseases. “Next we want to find out whether the cells also control the sensitivity of brown fat to insulin in humans”, explains Steculorum.

09.01.2023
Talismans and Totems Can Be a Rewarding Business Task

Talismans and totems could be a lucrative business proposition in most parts of the world and can be quite the brain teaser to boot. To the uninitiated, within the talisman […]

Avast Software is among the world’s www.kvbhel.org/reviews/5-steps-to-choose-the-advanced-affordable-and-easy-to-use-data-room-provider/ leading computer security corporations. It is headquartered in Prague, Czech Republic and utilizes over 1, 700 people in various places around the world. […]