We report a 24-year-old woman who presented with a slightly hyperpigmented plaque on the left shoulder, which appeared during adolescence. The lesion was unusual in that it was composed of densely grouped papules without hypertrichosis. Histopathologic examination revealed smooth muscle bundles in the dermis, consistent with a smooth muscle hamartoma. These lesions share many clinical and histopathologic features with Becker’s nevi and therefore have been considered part of a spectrum. We consider our case to be a unique presentation of an acquired smooth muscle hamartoma as supported by a review of the literature.

Smooth muscle hamartoma (SMH) is derived from benign proliferation of smooth muscle bundles in the dermis [1]. It usually presents at birth or shortly thereafter. However, acquired lesions have also been reported, although considered extremely rare. Only 12 cases have been published in the English medical literature to date, five of which were believed to have originated from arrector pili muscle [2–6]. Herein, we report a case of what we consider an acquired SMH simulating Becker’s nevus, but with an unusual clinical appearance.

A 24-year-old Icelandic woman presented with a slightly hyperpigmented plaque on the left shoulder. The lesion was composed of densely grouped papules forming a rippled or pebbly appearance, each papule being 2 mm in diameter. No hypertrichosis was apparent. The patient had first noticed the lesion during adolescence. Initially, it was limited to the anterior part of the left shoulder. Subsequently, it has slowly enlarged, extending posteriorly down the upper arm. At the time of presentation, the area measured 19 x 11 cm. The lesion was occasionally pruritic, particularly after exposure to sunlight or hot water. On rubbing the papules, the area became slightly erythematous and irritated, but pseudo-Darier’s sign was not observed. The patient was otherwise healthy.

A 4-mm punch biopsy was performed, which showed a papillomatous and slightly acanthotic epidermis. There was a slight focal increase in melanin in the basal cell layer. In the superficial and mid-reticular dermis there were several bundles of smooth muscle. Focally, the smooth muscle extended nearly across the entire specimen. The patient was reassured about the benign nature of the lesion and received no further treatment.

SMH most often presents as patches or plaques on the trunk or proximal aspect of the extremities [7]. Transient piloerection or elevation of the lesions, induced by rubbing, is referred to as pseudo-Darier’s sign [8]. Pruritus has also been reported, especially after hot showers or exposure to sunlight [3, 5, 6]. 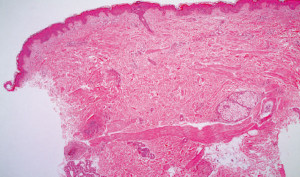 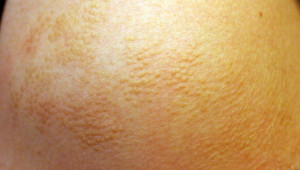 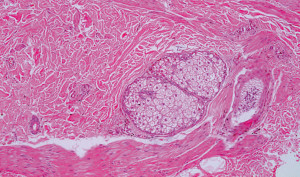 The lesions have shown no evidence of malignant transformation and do not require treatment. Histopathologic features comprise variably oriented, discrete hyperplastic smooth  muscle bundles within the reticular dermis [8]. Patients with SMH can have similar epidermal changes to those seen in Becker’s nevus. These include papillomatosis, hyperpigmentation, hyperkeratosis and acanthosis [7]. Moreover, proliferation of dermal smooth muscles have also been described in Becker’s nevus [1].

Because of these overlapping features, it has been proposed that these lesions should be considered as a spectrum. At one end is congenital SMH, which presents at birth and may occur in the absence of epidermal changes. At the other end, however, is Becker’s nevus, which usually appears during adolescence as a hypertrichotic and hyperpigmented plaque [1–4]. In accordance with this proposal, Wong, et al, felt that cases in which smooth muscle bundles were found in association with hyperpigmented and hypertrichotic patches, appearing around puberty, should be located nearest the Becker’s nevus end of the spectrum. On the other hand, lesions with flesh colored or hyperpigmented plaques and few terminal hairs were closer to the SMH end [2]. Our case has characteristics of both entities.

It appeared in adolescence, but did not contain hypertrichosis and only slight hyperpigmentation. Therefore, we believe this case is closer to a SMH, in the wide spectrum between SMH and Becker’s nevus.

A rare form of congenital SMH has been described as having a follicular spotted appearance with prominent pigmented papules in the patches [7]. Apparently, only five cases have been reported of this rare variant [7, 9, 10]. None of the previously reported acquired lesions had clinical appearance similar to our patient. We therefore consider our case to be a unique presentation of an acquired smooth muscle hamartoma.

Debatable public views on kids’ privacy come in stability. It was taken to light during a study, used by Meetville (internet dating software to discover the proper person), between 10/10/14 and 12/1/14. 33,850 voters have actually provided their own answer to the next concern: “Should parents be permitted to study adolescents’ texts?” We have seen […]

How to generate a book review if you failed to examine the reserve?333. Well-known mom sayings. 334. Why do men put on skinny denims?335. Adrenaline pursuits at dwelling. 336. How to be lazy and successful?337. Our Team of Ph.D Authors Destination New Obtain It’s cost-free, swiftly, and secure Write My Paper Overview Why faith this […]