The non-ablative fractional 1,927nm Thulium laser (LaseMD, Lutronic) is an innovative device addressing as well medical as aesthetic and cosmetic indications. The system allows nearly painfree treatments with a depth of 200 µm setting multiple microbeams. The stratum corneum stays intact despite of superficial ruptures, coagulation zones appear only in the underlying layers of the skin. Thus, the Thulium laser creates perfect conditions for a laser assisted drug delivery of either cosmetic sera or medical substances like 5-ALA for daylight-PDT. Further indications for a treatment are skin rejuvenation, hair growth, actinic keratoses, hyperpigmentation and melasma.

With a fractionated, non-ablative 1,927 nm thulium laser (LaseMD, Lutronic), a novel system with promising application possibilities is available in the medical and cosmetic field. In addition to applications in the aesthetic-cosmetic field such as skin rejuvenation or pigment reduction, especially for melasma, there are medical indications in the context of photoaging or improvement of hair growth. In both areas, the possibility of laser-assisted drug delivery with antioxidants or stem cell-conditioned media is of particular importance. This method, which has not been widely used so far, opens up new treatment procedures with significantly improved results. A large growth market is opening up in the cosmetic area in particular.

As a clinical system, the thulium laser is marketed under the name LaseMD by Lutronic. The device operates with a maximum power of 5 W and up to 20 mJ per microbeam. The number of microbeams is between 60 and 100 per square centimeter, depending on the selected treatment mode. The diameter of the microbeams is 100 µm, the maximum penetration depth into the tissue is 200 µm. Due to the penetration depth and the absorption behavior, the stratum corneum remains intact except for crack formations; coagulation zones only develop in the layers below. In addition to triggering the laser via a foot switch, the LaseMD is equipped with a speed-controlled magnetic roller system, which allows rapid surface treatment by rolling over the tissue to be treated. The treatment of an area of 100 cm² is possible in less than one minute.

Non-ablative thulium lasers are available for both medical and aesthetic indications.

The most important medical indication is photoaging with its facets such as hyperpigmentation, actinic keratosis and wrinkling [1,2]. In addition to solar lentigines, melasma also responds well to the thulium laser [2,3]. Very good results have also been obtained for the pre-treatment of an area of skin to intensify photodynamic therapy [4,5]. In the case of androgenetic alopecia, side-by-side studies have shown an improvement in hair growth under treatment with the thulium laser [6]. This treatment can also be combined with autologous plasma (PRP) or stem cell conditioned media [7,8].

In the aesthetic field, skin rejuvenation is the main indication. Fine lines can be treated very well in several sessions without downtime. In combination with the introduction of cosmetic agents such as antioxidants or retinol, these effects can be further enhanced. The lightening of darker skin types (Fitzpatrick 3 and 4) in combination with tranexamic acid plays a major role, particularly in the Asian region. In this country, the focus is increasingly shifting to improving the skin’s appearance through one-off treatments a few days before public appointments or photo shoots, as the discreet surface treatment leads to a glow effect on the skin.

There are limitations with regard to UV protection in the summer months, although the risks are lower than with more aggressive laser types. In studies on undesirable side effects of non-ablative laser systems there are also individual references to the thulium laser. Prolonged erythema, post-inflammatory hyperpigmentation and deterioration of pre-existing melasma are mentioned [9]. Herpes simplex infections or bacterial superinfections occur very rarely [10]. 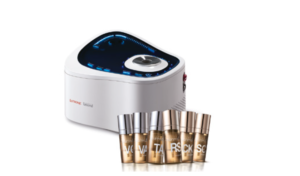 Radiofrequency systems penetrate with isolated needles through the epidermis into the dermis, where they cause thermal damage in depth without heating the surface. The fine stitch channels are open for a short time, but close very quickly. The effect of RF systems aims at tightening and collagen regeneration for wrinkle treatment, the healing time is short.

The CO2 laser leads to continuous tissue destruction by ablation of the epidermis and parts of the dermis with accompanying coagulation of the surrounding tissue. The resulting downtime is very long, as is the healing time. The resulting micropores are closed by serum, the surrounding coagulation zone prevents substances from penetrating from the skin surface into the tissue. The indications for CO2 lasers can be seen in the treatment of deeper wrinkles and light damage.

The ablative Erbium:YAG laser leads to a complete destruction of the epidermis and parts of the dermis without coagulation of the surrounding tissue. The downtime after one treatment is several days due to erythema and crust formation. The resulting micropores close relatively quickly due to inflowing serum. Erbium:YAG lasers are effective for the treatment of pigment, light damage and deeper wrinkles.

The non-ablative Erbium:GLASS laser leads to continuous coagulation zones in the epidermis and dermis. Downtime due to erythema and swelling, and occasionally scabbing, is a few days. Since the skin is only coagulated and not opened, there is no possibility of penetration of active substances. Erbium:GLASS lasers are used for the treatment of mild wrinkles and scars.

The Thulium Laser leads to coagulation zones in the epidermis and dermis, but leaves the stratum corneum intact. The preserved skeleton of the stratum corneum enables the penetration of active ingredients into the deeper skin layers. Healing is significantly faster than with ablative procedures. Indications are treatment of pigmentation or light damage and for superficial skin rejuvenation.

With its special mode of action, to create coagulation zones in the deeper skin layers, while only breaking up the stratum corneum and keeping its structure otherwise intact, the thulium laser is excellently suited to introduce active ingredients into the skin. This is known as laser assisted drug delivery.

This form of application can be used for both drugs and cosmetic agents. When introducing cosmetics, it is also important that no co-formulants such as preservatives or fragrances are introduced into the skin. Furthermore, the smaller the molecule size, the better the active agents penetrate the skin.

Various active ingredients are available from the manufacturer of the thulium laser that can be infiltrated. As a special feature, they are supplied in ampoules with two separate chambers for active ingredient and carrier substance. The substances are mixed directly before application. The device has a special ampoule receptacle for this purpose, which is responsible for mixing the substances. Thus, disturbing preservatives can be avoided.

Available active ingredients include vitamin C or resveratrol as antioxidants, retinol for skin rejuvenation and tranexamic acid to lighten pigmentation. The active ingredients are available in a nanoformulation, which significantly increases the penetration capacity. In addition, two further sera are available containing stem cell conditioned media with a high concentration of growth factors. These are used for skin rejuvenation or for promoting hair growth.

With the spread of daylight PDT for the treatment of actinic keratoses, the topic of laser-assisted drug delivery has increasingly come into focus in this sector. Ablative CO2 lasers are often used to set micro-injuries before applying aminolevulinic acid to improve the depth effect of PDT.  However, this effect is partially nullified due to heat generation with consecutive coagulation of the area surrounding the microcolumns. Furthermore, treatment with a fractionated CO2 laser is borderline painful despite low power settings.

The thulium laser offers an excellent alternative to the CO2 laser: it is painless. Due to the speed-controlled roller system, the treatment of the scalp is completed in a few minutes. The structural preservation of the stratum corneum without surrounding coagulation zones improves the penetration of the aminolevulinic acid into the depths.

The fractional thulium laser is per se suitable for photoaging treatment. In a study, Boen et al. demonstrated that a single treatment session is sufficient to significantly improve chronic light damage such as pigmentation, keratosis and wrinkling [1]. These effects were also demonstrated in two further studies as a half-side comparison of the décolleté [4]. The effect was significantly further improved by subsequent PDT treatment of one side. The combination of laser + PDT resulted in a removal rate for actinic keratoses of 100% versus 82% with PDT alone [5]. Studies that directly compare the results of CO2 laser versus thulium laser in PDT are missing so far.

When applied to the hairy scalp, the thulium laser leads to an improvement in hair growth. Thermal damage with subsequent tissue renewal and vascularization improves the trophic situation of the hair follicles, which leads to improved hair growth [6].

Studies have shown a significant increase in hair thickness and hair count in patients with androgenetic alopecia for the treatment combination of thulium laser and autologous plasma (PRP) [7]. In two other cases, stem cell conditioned media were used instead of PRP. Both showed significantly improved hair growth after 12 applications [6,8]. One case report describes an increase in pigmented hair in a graying patient under the same treatment conditions [11].

18.03.2022
Behavior Professional Patrick Wanis Works People Improve Their Union With Them To Produce Healthier Affairs With Others

The brief variation: Most relationship coaches focus on helpragazzi in cerca d’amore Firenzeg their clients bring in other individuals into their life, but, in accordance with Behavior and partnership Expert Patrick […]