Natural killer cells have a memory

Researchers at the University of Bonn and the Ludwig-Maximilians-Universität of Munich have decoded a new mechanism of how the immune system can specifically attack pigmented cells of the skin. It was previously believed that natural killer cells did not have an immunological memory for the body’s own tissues. However, the scientists have now showed that these immune cells can indeed “remember” pigmented cells when they come into more frequent contact with a specific contact allergen. These results may provide new insights into the development of the disease vitiligo and may also offer new options for the treatment of malignant melanoma. These results have now been published in “Immunity”.

Pigmented cells of the skin are crucial as a protective shield against UV-radiation. An often-desired suntan can only form with the aid of the enzyme tyrosinase inside these pigmented cells. The more exposure to sunshine, the more pigments are formed by this enzyme. The compound monobenzone can specifically block tyrosinase and thereby trigger a stress reaction. As a result, the immune system attacks the affected pigmented cells. A frequent consequence is vitiligo, which leads to milky-white unpigmented areas on the skin.

Scientific studies have shown that people with vitiligo are at lower risk of developing malignant melanoma. A possible method for treating this type of cancer could involve actively triggering vitiligo with the tyrosinase blocker monobenzone. “The idea is to use a less severe disease as a weapon against malignant melanoma,” says Dr. Jasper van den Boorn from the Institute of Clinical Chemistry and Clinical Pharmacology of the University of Bonn, who previously researched this connection in his doctoral thesis at the University of Amsterdam and demonstrated the fundamental feasibility of this option. 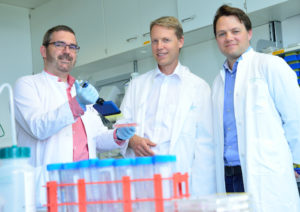 “However, the initial mechanism by which the immune system identifies the monobenzone-exposed pigmented cells as dangerous, before attacking them, has been unclear so far,” reports Prof. Dr. Veit Hornung, who recently moved from the University of Bonn to the Ludwig-Maximilians-Universität in Munich. It is known that monobenzone has a contact-sensitizing effect on pigmented skin: In principle, this substance alone is inactive. Only when monobenzone docks onto the tyrosinase enzyme, a so-called hapten is generated in the pigmented cell. This is a newly formed “foreign structure” that can specifically activate the immune system. By applying low doses of monobenzone several times in succession on the rodents’ skin the researchers explored this path in detail on mice.

The way in which the animals’ immune defense reacted to this hapten amazed the researchers. “Normally the immune system mobilizes a mixture of various white blood cells to attack hapten-exposed tissues,” reports Dr. van den Boorn. “However, the multiple monobenzone exposures induced only natural killer cells to recognize and attack the pigmented cells.” Natural killer cells are part of the innate immune system and kill abnormal cells – such as cancer cells or virus-infected cells. Previously, scientists believed that they did not have the capacity to remember and specifically attack the body’s own tissues. Up to now, this phenomenon has only been attributed to T and B lymphocytes.

“However, our results clearly show that natural killer cells can also carry out a long-lasting and effective immune reaction against the body’s own pigmented cells, including malignant melanoma cells,” says Prof. Dr. Gunther Hartmann, Director of the Institute of Clinical Chemistry and Clinical Pharmacology of the University of Bonn. The researchers established this by studying mice that were not able to form any functional T and B lymphocytes. Nonetheless, white spots still developed in the animals’ fur, and previously transferred malignant melanoma cells were destroyed, because the mice’s natural killer cells remembered and attacked the pigmented cells.

The NLRP3 inflammasome serves as a checkpoint

In order for this immune response to occur, an immune-checkpoint had to give the green light first: the NLRP3 inflammasome. “This is a protein complex that integrates multiple pieces of signaling information in macrophages, special phagocytes that reside in tissues. Once switched on, macrophages then decide whether immune cells including natural killer cells receive their marching orders,” explains Prof. Dr. Veit Hornung. If the researchers incapacitated this checkpoint, the monobenzone-induced tyrosinase hapten did not trigger the desired immune reaction anymore.

The results may open up new therapeutic avenues for the treatment of malignant melanoma, demonstrate a new type of immune recognition and could even shed new light onto the incipient events causing the development of vitiligo.

21.10.2019
What exactly is Virtual private network, along with Good reason May possibly I Have got to have Certain

rn”We are acquiring an unparalleled quantity of inquiries from people on the lookout to access Netflix provider, suggesting there are not a large amount of VPNs remaining that present an choice workaround,” NordVPN CIO Emanuel Morgan tells Comparitech. “Holding up with giving new workaround answers could possibly require important assets and it is comprehensible that […]

This presents the individuals the easy way of getting engaged and educated in the general public since of the media’s role. Media is the backbone of a democracy as it helps shapes our sights and helps make us aware of the various social, political, and financial scenarios whether it reveals us the bare reality or […]

16.11.2019
Can certainly someone file anyone with out your own consent

Magisk Cover will make it doable to use both equally at the same time. It is one of the best contact recorders in the Perform Keep and gives tons of features these kinds of as: – Search – Grouping recordings by day – Car e mail (Pro) – Vehicle delete previous recordings – Marking recordings […]