Dengue fever (DF) is the most common infection by arboviruses world wide. Endemic areas are seen in tropic and subtropic countries. Recently, more cases have been detected in Europe and mosquito vectors were identified in some Mediterranean regions. We report of a 21-year old German traveller returning from Indoneasia who presented with sudden onset fever, arthralgia and erythema with island of sparing. RT-PCR identified DF virus and serology disclosed IgG and IgM antibodies. Based on the medical history this DF infection was caused by type 4 virus. One year before, he had a primary infection with type 1 virus. The course in secondary infection often is more severe and the risk of complications such as haemorrhagic DF and DF shock syndrome is increased. Because of possible mucocutaneous symptoms dermatologists play an important role in diagnosis and infection control.

1Department of Dermatology and Allergology and

An estimated 100 million cases of dengue fever (DF) and 250,000 cases of dengue haemorrhagic fever (DHF) occurs annually worldwide [1]. The past 20 years have seen a dramatic geographic expansion of epidemic DF world wide. An increasing number of reports of DF and associated illness among travellers to DF virus–infected areas paralleled the changing epidemiology of DF in local populations [2].

DF is endemic to tropical and subtropical regions caused by Flaviviridiae. Four distinct types of this kind of viruses are known: DENF 1 to 4. Transmission of the virus is through insect bites of female mosquitoes, in particular Aedesmosquitoes [3]. In metropolitan France, DF is a mandatory notifiable disease sinceAedes albopictushas become established in Mediterranean France coats region in 2004, in Corsica in 2006, and 2009 in the centre of Marseille. DF vectors have settled in Europe [4].

DF is typically seen in older children and adults. It is characterized by sudden onset of fever with a biphasic course, headache, muscle and joint pain and gastrointestinal symptoms. Some dengue infected individuals develop the severe, life-threatening form of the disease, Dengue Hemorrhagic Fever/ Dengue Shock Syndrome (DHF/DSS) (Tab. 1). In Central Europe DF is seen in immigrants and travellers returning from the endemic regions [6].

Mucocutaneous symptoms are a hallmark of the disease, which is of importance in the differential diagnosis of sudden fever in travellers returning from abroad (Tab. 2; [7, 8]). With that knowledge, dermatologist can play an active role in early detection of possible DF infected patients. We wish to report a case of secondary DF with cutaneous manifestations from Saxony, Germany.

A 21-year-old male German traveller presented with sudden onset of fever, malaise and rash. He returned from a business trip to rural Indonesia and the forest regions. He was in the same area one year ago. That time, he also had suffered from sudden onset fever with rash confirmed as DF virus type 1 infection.

This time the course of the disease was more severe. He presented with fever 38.7 degree Celcius followed by two fever-free days and then again fever > 38 degree Celsius with the development of head ache, arthralgia and rash. The rash also was different form the light cutaneous affection the patient remembered one year ago. He presented with a generalized confluent erythema with island of sparing like “white islands in a red sea”. Palms and soles were involved (Fig. 1a-c). There was a burning sensation with light itch but not excoriations due to scratching. Mucous membranes were not affected.

Treatment and course: Because our first working hypothesis was a drug-related exanthema (DRESS syndrome) due to antipyretics we applied 100 mg prednisolone and 1 ml dimetinden i.v. once. The burning and itching sensations and arthralgia responded quickly. No other medication was necessary. Complete remission was achieved.

DF is seen in the Mediterranean area and North Africa, South Asia including China and India, and the Americas. DF is an emerging disease; it is increasing in geographical distribution and severity, despite being significantly underreported. Europe is also more and more affected, mainly by travellers.

The majority of DF infections of European travellers were acquired in South-East Asia [3]. In 2010 (until 14 April), five cases of DF including one case of DHF, have been reported from EuroTravNet sites in France and Sweden, in four travellers returning from the Comoros and one traveller returning from Zanzibar, Tanzania [4].

In order to protect themselves, travellers to areas where vector-borne diseases such as DF are present should be advised to adopt some protective measures to avoid mosquito bites. Moreover, physicians should be prepared to diagnose and manage imported cases of DF in travellers returning from endemic regions. Viraemic patients may spread the infection to regions where competent vectors are present, including the Mediterranean area and the south of Europe.The existence of four closely related dengue virus serotypes contributes to difficulties in diagnosis. In addition to fever, the most commonly reported symptoms of DF included malaise (96.7 %), headache (92.4 %), chills (90.2 %), myalgia (81.4 %), arthralgia (76.2 %), and hyporexia (75 %) (Tab. 1; [8]). 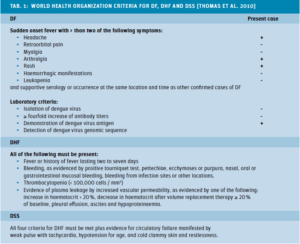 The mechanisms by which DF virus causes severe illness remain to be elucidated. Both viral and immune host factors seem to contribute to the level of the pathogenicity. Infection of dendritic cells initiates different responses in immature and mature dendritic cells with release of dendritic cell-specific intercellular adhesion molecule-3-grabbing non-integrin (DC-SIGN) or expression of Fc receptors. Activation of T-lymphocytes results in a very strong cytokine response responsible for vascular leakage in addition to activating effector cells. Antibodies and the virus itself are involved in release of complement and anaphylatoxins [9-12].

Fig. 1: Cutaneous manifestation of Dengue fever, secondary infection. (a) Erythema of the hand with island of sparing. (b) Palms involved. (c) Legs involved.

Immunity induced by natural infection is believed to provide serotype-specific lifelong protection. On the other hand, previous infection by a distinct serotype increases the risk for dengue hemorrhagic fever and dengue shock syndrome (DHF / DSS) [11-13]. We suspected a DF virus type 1 infection as primary infection in our patient and a recent virus type 4 infection.

Although the pathogenesis is not completely understood can we identify persons who are at risk for DHF? A matched case-control study in a dengue seropositive population in two Brazilian cities found significant associations DHF and white ethnicity, high income, high education, reported diabetes and reported allergy treated with steroids. Black individuals who reported being treated for hypertension had 13 times higher risk of DHF then black individuals reporting no hypertension [14]. Concerning clinical and laboratory signs, DHF is associated with age between 12 and 45 years, rash, vomiting, temperature >38 degrees C, leukocyte count <4500 / µL, and platelet count <90.000 / µL [15].

Predictors for DF shock syndrome during the febrile stage are increase in hematocrit > 25 %, a platelet count < 40,000/microl, an activated partial thromboplastin time >44 seconds, a prothrombin time >14 seconds, a thrombin time >16 seconds or a von-Willebrand factor (VWF) antigen or VWF ristocetin co-factor > 210 %. The relative risk ranged from 4.8 to 10.9 [18].

Our patient returned from Indonesia. He obviously had a secondary infection with DF virus type 4. His primary infection was running a benign course with some days of sudden fever, head and muscle ache, and a limited rash. The secondary infection was more severe, as usual. We observed a generalized slightly itching confluent erythema with islands of sparing. Treatment of uncomplicated DF is symptomatic.

Dengue infections commonly occur among U.S. residents returning from travel to endemic areas as the Caribbean, South America, South Central Asia, and Southeast Asia. During 2006-2008, the highest proportion of laboratory-confirmed and probable cases with known travel histories were in persons who reported travel to the Dominican Republic (121; 20 %), Mexico (55; 9 %), and India (43; 7 %). The Center for Disease Control (CDC) therefore recommends that health-care providers should consider dengue in the differential diagnosis of patients with a history of travel to endemic areas within 14 days of fever onset [19]. It has been assumed that due to global climate change arboviral threats including DF will spread to Europe. The presence of vectors in some areas will support such expansion [20].

We have put together the best photos of the Annual Meeting which you can see further down in our photo gallery. The special issue of Cosmetic Medicine with the abstracts you can download as a PDF here. Abstracts       Download (1,9 MB)       Photo Gallery 5th Annual Meeting of the […] 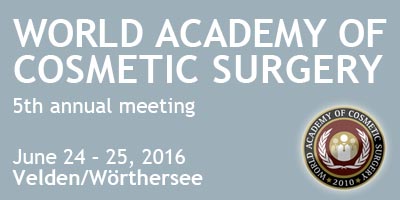 24.05.2016
Almirall and Bicosome enter into a collaboration and sublicense agreement for the development of topical drug delivery formulations

Almirall S.A., the global pharmaceutical company based in Barcelona, and Bicosome, a start-up company that develops and commercializes high performance cosmetic and dermopharmaceutical ingredients, announced that they have entered into a research, collaboration and sublicense agreement for the development of multiple topical dermatological products, based upon Bicosome’s proprietary patented delivery technology platform, Bicosome® Technology. In […]

25.04.2015
New President of the American Society for Laser Medicine and Surgery (ASLMS)

Dr. Mathew Avram, has been elected President of the American Society for Laser Medicine and Surgery (ASLMS) for 2017. The election was by vote of the 4,000 members of the multidisciplinary society. Dr. Avram will serve as Vice President in 2015 and President-Elect in 2016. ASLMS is the world’s largest professional organization dedicated to promoting […]