Background: Blunt trauma may cause injuries of subcutaneous adipose tissue. Main observation: We observed a 23-year-old woman who developed a chronic pain after falling down a staircase. The pain was circumscribed and unilateral in the lumbar area. On palpation multiple dense nodules were noted. Surgery was performed which resulted in a complete remission of pain. Histopathological analysis revealed multiple oily cysts located in the subcutaneous adipose tissue. Conclusion: Posttraumatic oily cysts may rarely be associated with a chronic pain syndrome.

The response of adipose tissue to blunt trauma varies depending on the force and type of impact (right angle or tangent): Typical variants include perilobular hemorrhage, contusion, disintegration of fat lobuli, and disintegration with development of a subcutaneous cavity [1].

Fig. 1: Surgical specimen from the bottom of the lesion. 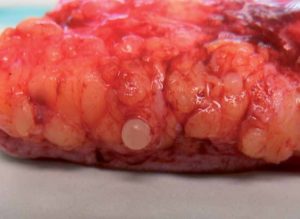 A 23-year old, otherwise healthy female presented with multiple painful subcutaneous nodules in the lumbar region. She had not taken any medications but reported an accident several months ago, were she had fallen down a staircase. The blunt trauma had not induced bony lesions or nerve damage.

Disclaimer: Nothing to disclaim.
Funding: No funding.

On examination we observed an area of about 25 x 6 cm just above her right crista iliaca with multiple small subcutaneous firm nodules. Their diameter was between 2 and 4 mm. The nodules were mobile but painful on pressure. No spontaneous pain occurred.

We performed a complete excision of the area with primary suturing. On gross morphology small cystic formations were noted (Fig. 1 and 2). The cysts contained an opaque yellowish, oily fluid. Histopathological examination confirmed the diagnosis of oily cysts. Wound healing was uneventful. She had a complete remission of the local chronic pain.

Various histopathologic changes can be induced by blunt trauma. Chronic pain resulting from adipose tissue injury is rare. Only a single case has been reported previously (Crawford et al. 2009) [2]. Since the nodules themselves were not painful during surgery we suppose that under pressure they might have irritated local nerves.

The differential diagnosis of painful subcutaneous adipose tissue nodules includes angiolipomas, panniculitis, and Dercum’s disease among others [7–9]. Histopathologic analysis confirmed oily cysts in the present case. Oily cysts have been seen after lipofilling [10].

Posttraumatic oily cysts may be another rare condition associated with chronic pain syndrome. Surgery is a therapeutic option with rapid pain relief.

25.04.2015
New President of the American Society for Laser Medicine and Surgery (ASLMS)

Dr. Mathew Avram, has been elected President of the American Society for Laser Medicine and Surgery (ASLMS) for 2017. The election was by vote of the 4,000 members of the multidisciplinary society. Dr. Avram will serve as Vice President in 2015 and President-Elect in 2016. ASLMS is the world’s largest professional organization dedicated to promoting […]

Neues Verfahren zur Untersuchung von Lymphödemen – Gewebeproben digital und in 3D Juliane Albrecht Presse- und Informationsstelle Westfälische Wilhelms-Universität Münster     Researchers at the Cells-in-Motion Cluster of Excellence have developed a new method for producing digital 3D reconstructions of blood and lymphatic vessels from tissue samples and then creating images of them for analysis. The […]

VICHY Laboratoires, the VICHY EXPOSOME GRANT will promote and encourage research activity on the skin exposome. One research grant of 15 000 € will be awarded annually to a research project proposal in the field of exposome and skin.   What is exposome? The human body is subjected to and responds to complex exposures throughout […] 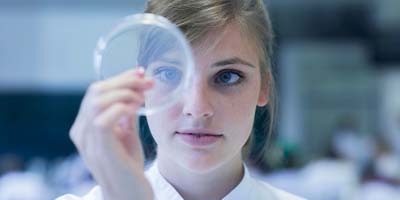